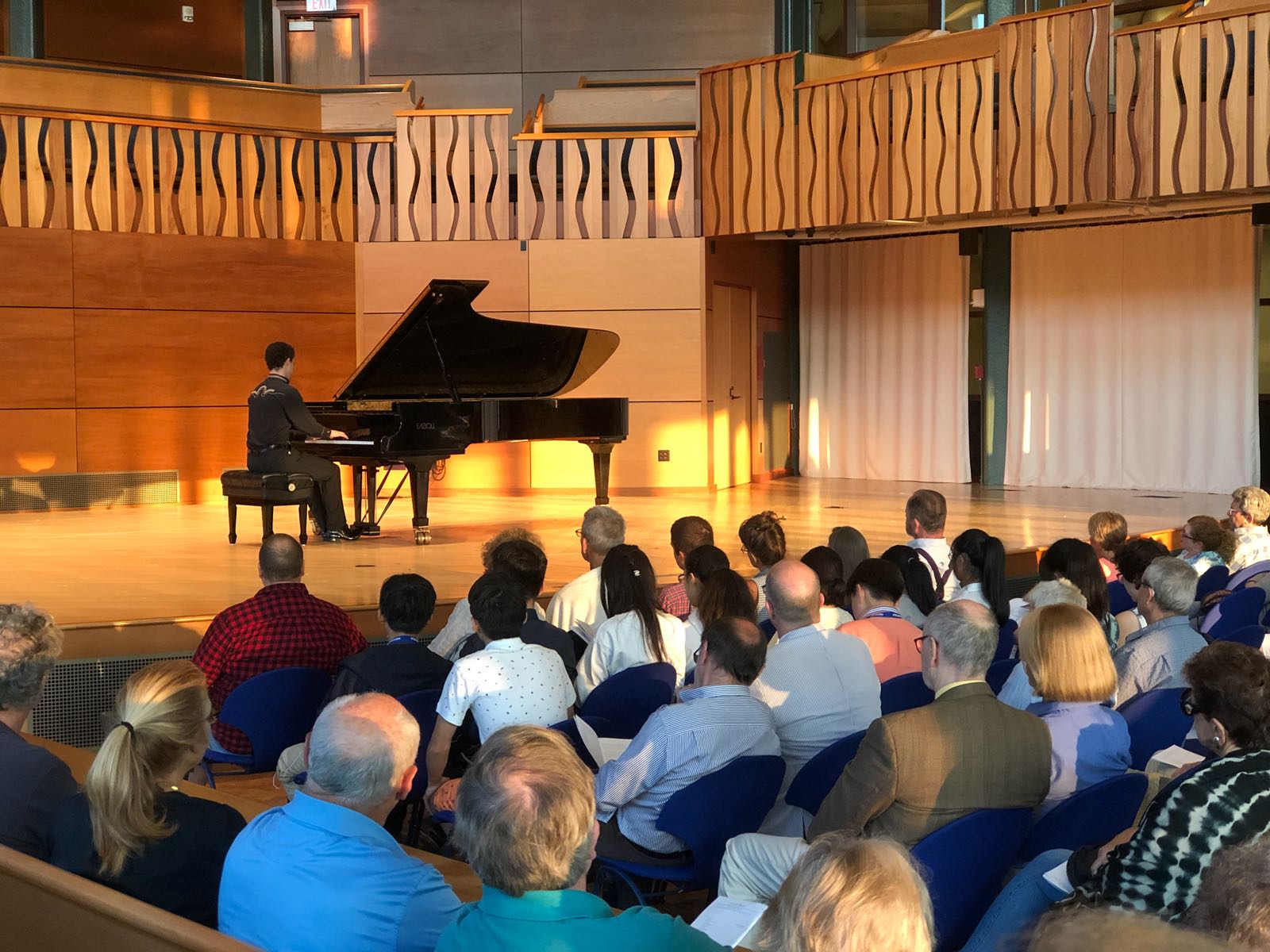 Leo di Maria performed his American debut at Hotchkiss School in Elfer’s Hall this past Thursday evening. The program of this twenty-one-year-old was slightly unusual. The pairing of Robert Schumann’s Humoresque, Op. 20 with Sergei Prokofiev’s Sonata no. 8 in B flat major, Op. 84 appeared at first glance to be an odd choice. Schumann’s Romantic wanderings written at 29 were composed within one week in 1839; Prokofiev’s three part Sonata was written over a period of about three years and completed at the end of 1944 when he was forty-three. Both compositions run at about 28 minutes.

Leo di Maria is the new stage name of Leonel Morales-Herrero; his father is Leonel Morales, one of Spain’s most noted pianists. The rise of Leo as the most prominent young pianist in Spain has caused confusion with his father’s name—hence the new change. The printed program featured both names, as well as Leo de Maria. (His mother Maria was in the audience.)

Schumann sported life-long admiration for the novelist Jean Paul Richter, who created a dialogue comedy of schizophrenia with characters that were opposites in philosophy and behavior. Schumann identified with this depiction of split personality and concluded he had three personalities: his boisterous, extroverted, exuberant personality was Florestan; his shy, tender, introspective personality he called Eusebius; when they melded as one and worked hand-in-hand, he imagined he was Raro, superman in top form. Apparently all three personalities were put to work on composing these extravagant mood pieces. Eusebius began the first of the eight pieces, but then it is like walking through a room of fun-house mirrors. There is no formal architecture: these miniatures are inspired, associative musings without rhyme or reason and the contrasts supply the drama.

Leo was not only technically adept in the performance of this hop-scotch work, but he dug deeply into the various moods that inspired Schumann’s witty jottings before he had consummated his love for Clara Wieck. From meditative to silly, to jubilance to sadness, Leo moved his magic fingers over the keys as he evoked the wild eccentricity of Schumann in one of the most eccentric flings in Romantic music.

Prokofiev’s initial success was as a young pianist. The Eighth Sonata appears to be autobiographical in the first two parts, then public drama in lofty style in the third part. The first movement appears to a lyric sketch of childhood, education, and first stirrings of romance; the second movement dramatizes his early success as a pianist, marriage, and travels abroad with his great success in the United States. The third part his return to Russia and the Second World War.

Leo played the first Andante movement with Eusebius-like lyricism and delicacy; the showcase pianism of Raro dominated the second Andante movement; the third Vivace was all Florestan thundering the Russian artillery at Germany. It is as if three different personalities were at work here, and it was clear why Leo was making this brilliant comparison. Not only did Leo play in top form, but he was giving insight into the anomalous process of Prokofiev’s arcane mind.

I must say that I prefer Eusebius, yet Raro and Florestan is what Prokofiev became in order to compete with Stravinsky and Rachmaninoff. It is the simple melodic line underneath the complicated artificial bluster that is the best of Prokofiev. Leo was able to conjure all three personalities of Prokofiev, whether musing, showcasing, or exploding on the terrors of war.

It was exciting to be at the American Debut of a future international star. I hope he always will carry Eusebius in his heart no matter how successful Leonel-Leo becomes. For encore Leo performed an astonishing version of “La Malanga.” A very short clip of Leo playing Chopin appears below.